What is Islam You Decide

Australia is at risk from Sharia Law, Only because Treasonous Politicians let Muslim's in to Australia


ISLAM - a religion of peace as stated by Malcolm Turnbull on Q & A  you be the judge.
Is this what we should allow to overrule Australian Law and our Australian Commonwealth Constitution.  Maybe the treasonous Politician's with their Green constitution Book, will let this happen.  BUT Islam doe's Not'fit into our Australian way of life. Islam, Muslims do not assimilate.

There may be some of you out there reading this article who have heard the term "sharia" but don't real'y know what it is. So we present to you 34 actual points of Sharia Law to give you an idea what it would be to live under it. Then you can decide for your self if it is a good thing or a bad thing. Now let us examine below a few laws of Sharia to see the truth.

Truth:
1 - Jihad, defined as "to war against non-Muslims to establish the religion", is the duty of every Muslim and Muslim head of state (Caliph). Muslim Caliphs who refuse Jihad are in violation of sharia and unfit to rule.
2 -A Caliph can hold office through seizure of power meaning through force.
3 - A Caliph is exempt from being charged with serious crimes such as murder, Adultery, robbery, theft, drinking and in some cased of rape.
4 - A percentage of Zakat (charity money) must go towards Jihad.
5 - It is obligatory to obey the commands of the Caliph, even if he is unjust.
6 - A caliph must be a Muslim, a non-slave and male.
7 - The Muslim public must remove the Caliph if he rejects Islam.
8 - A Muslim who leaves Islam must be killed immediately.
9 - A Muslim will be forgiven for murder of: 1 )  an opostate 2 ) an adulterer 3 ) a highway robber. vigilante street justice and honor killing is acceptable.


10 - A Muslim will not get the death penalty if he kills a non-Muslim.
11 - Sharia never abolished slavery and highly regulates it. A master will not be punished for killing hi slave.
12 - Sharia dictates death by stoning, beheading, amputation of limbs, flogging even for crimes of sin such as adultery.
13 - Non-Muslims are not equal to Muslims under sharia Law.
They must comply to Islam law if they are to remain safe.
They are forbidden to marry non-muslim women, public display wine or pork, recite their scripture or openly celebrate their religion holidays or funerals. Theyare forbidden from building new churches or building them higher than Mosques. They may not enter a Mosque without permission. A none muslim is no longer protected if he leads a Muslim away from Islam.

14 - It is a crime for a non-Muslim to sell weapons to someone who  will use them against Muslims, Non-Muslims cannot cause a Muslim, to say anything derogatory about Allah, the Phrophet, or Islam, or expose the weak points of Muslims, but Muslims can curse non-Muslims.
15 - A none-Muslim cannot inherit from a Muslim.
16 - Banks must be Sharia compliant and interest is not allowed.
17 - No testimony in court is acceptable from people of low-level jobs, such as street sweepers or bathhouse attendants. Women in low level jobs such as professional funeral mourners cannot keep custody of their children in case of divorce.
18 - A none-Muslim cannot rule even over a non-Muslim minority.
19 - Homosexuality is punishable by death.
20 - There is no age limit for marriage of girls, The marriage contract can take place anytime after birth and can be consummated at age 8 or 9.

21 - Rebelliousness on the part of the wife nullifies the husband's obligation to support her, gives him permission to beat her and keep her from leaving the home.
22 - Divorce is only in the hands of the husband and is as easy as saying "I divorce you" and becomes effective even if the husband did not intend it.
23 - There is no community property between husband and wife and the husband's property does not automatically go to the wife after his death.
24 - A woman inherits half what a man inherits.
25 - A man has the right to have up to 4 wives and none of them have a right to divorce him - even if he is polygamous.
26 - The dowry is given in exchange for the woman's sexual organs.
27 - A man is allowd to have sex with slave women and women captured in battle, and if the enslaved woman is married her marriage is annulled.
28 - The testimony of a woman in court is half the value of a man.

29 - A woman loses custody if she marries.
30 - To prove rape, a woman must have 4 male witnesses.
31 - A rapist may only be required to pay the bride-money (dowry)
32 - A Muslim woman must cover everey inch of her body, which is considered Äwrah", a sexual organ. Not all Sharia achools allow the face of a woman exposed.

33 - A Muslim man is forgiven if he kills his wife at the time he caught her in the act of adultery. However, the opposite is not true for women since the man "could be married to the woman he was caught with".
34 - It is obligatory for a Muslim to lie if the purpose is obligatory. That means for the sake that for the sake of abiding with Islams commandments, such as Jihad, a Muslim is obliged to lie and should not have any feelings of guilt or shame associated with this kind of lying.

The above are clear cut laws in Islam decided by great imams after years of examination and interpretation of the Quran. Hadith and Mohammed's life.

What part of the above is compliant with the True Australian Constitution of the Commonwealth. (the Red Book.) NONE

Malcolm Turnbull says Islam is a religion of peace, maybe he has included the Koran into the (Green Book ) what they call the Australian Constitution. 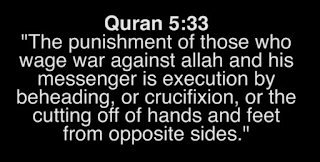 Spreading Globally
but Islam's spread in Western democracies is a new trend and one that is gaining momentum.

This spread of Islam in Western democracy is led by the Muslim Brotherhood and other Islamic groups that endeavor to maximize the spread of Sharia Law and Islam is the targeted societies while minimizing detection and push-back. This is achieved in 5 Phases: 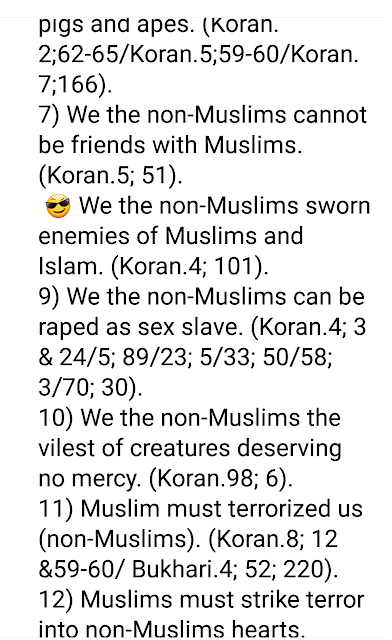 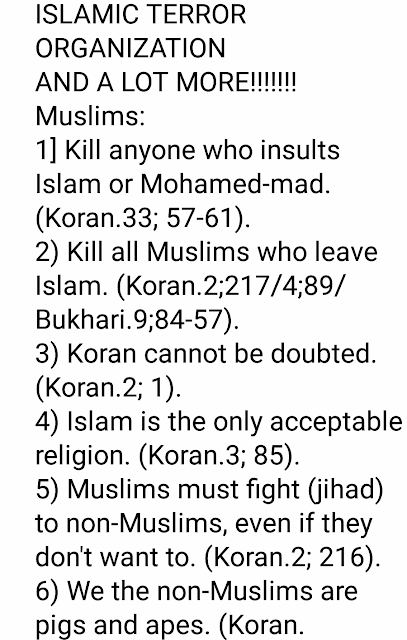 Spread of Islam
Phase 1: Arrival
When the first Muslims arrive in a Western democracy, they keep a low profile and make few if any demands on the host nation. Many quietly work as students, business owners, professors, doctors and other professionals, making good first impressions and gain respect. 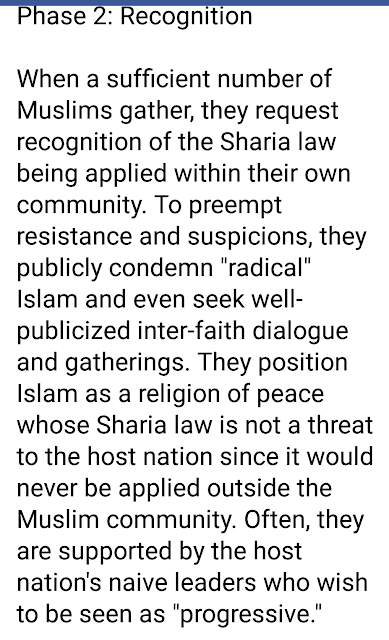 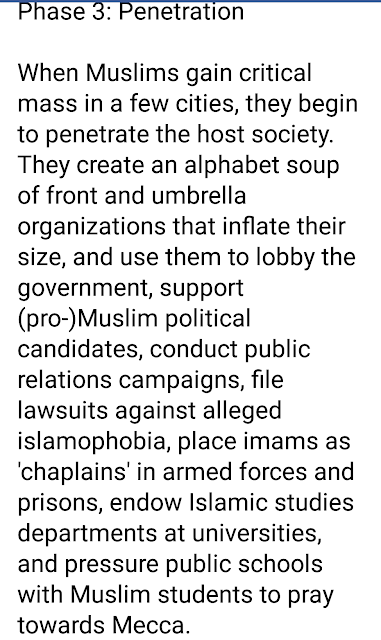 Sharia The Only Solution
Phase 4    Confrontation

When Muslims become a significant minority in the host country, they demand incorporating into its legal system elements of the Sharia Law. Often, this demand is made while "rogue"elements from the Muslim community threaten or engage in violence (e.g., Europe and any western Country such as Australia) 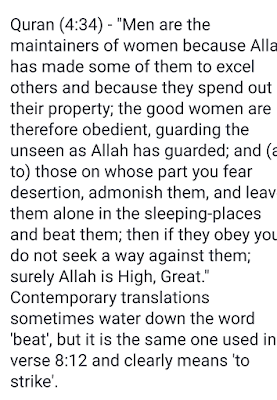 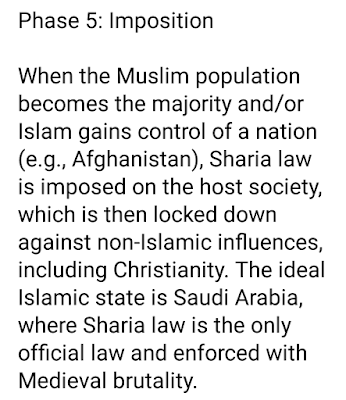 Politicians to adhere to Section 100 of our Constitutional. Its addressed to the House of Reps  the rights to water  http://chng.it/X...

shroud-image
I'm a self motivated Aussie, I loved this what was a great Country before the Treasonous Politicians screwed it to death, by removing our Australian Constitution of the Commonwealth, they destroyed every thing that was good about Australia but they can't take our Aussie guts and determination. We will eventually beat the Bastards and get Australia back to how i remember it most.